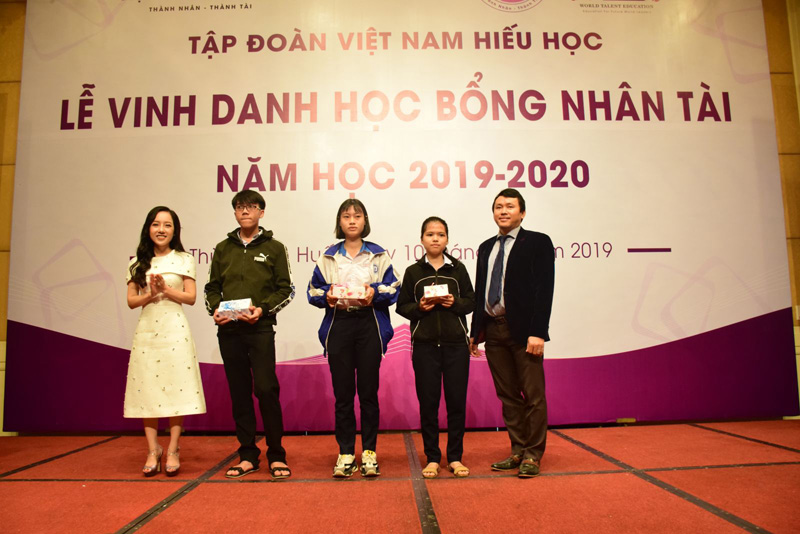 Awarded for Valedictorian and salutatorian

In the past months, Viet Nam Hieu Hoc Group had selected, surveyed and hosted Talent Scholarship Contest in 36 secondary and high schools in Thua Thien Hue Province. It is reported that 200 students from 23,000 candidates to be selected for scholarship proposals for study aboard in America and Canada. It is also shown that Hai Ba Trung High School had the highest number of students who achieved the awards for study abroad and Quoc Hoc High School for the gifted had the highest valedictorian rate.

The leaders of Viet Nam Hieu Hoc Group consulted students and their families with updated information of American schools and universities; ranges of scholarship opportunities; admission procedures; choices of schools, major and career orientations. In addition, students had sessions to meet with representatives from Life Preparatory Academy and Roger States University to discuss their concerns.

At the ceremony, Viet Nam Hieu Hoc Group honored and awarded six valedictorian and salutatorian in the Talent Scholarship Contest. In addition, Viet Nam Hieu Hoc Group also coordinated with The Association in support of Thua Thien Hue Province Handicapped and Orphans to hand 15 scholarships which valued at 1 million Vietnamese Dong each to the underprivileged students as the award for their efforts of study.

Viet Nam Hieu Hoc Group is the global educational agency for schools and colleges across the world. The group also has its representative office in the USA to offer consultations to students for their educational goal achievements. Many students have been awarded with athletic medals, merit scholarships and academic awards by schools and colleges.